As many of you have noticed, our old web address is no longer functioning.  We have now moved all of our online operations over to a new address, http://www.humanrightsdata.com. As mentioned in an earlier post, you can access the entire data set by using the links in the menu at the top of that page:

To view answers to CIRI's Frequently Asked Questions, click on the FAQ link.
Posted by CIRI Human Rights Data Project at 11:24 AM

It appears that a technical glitch resulted in some countries' scores for Freedom of Foreign Movement and Freedom of Domestic Movement being swapped in Version 2013.12.05 of the data set.  We believe this problem has been corrected in the new version of the data set (Version 2014.04.14), which is now available on our Data & Documentation page.
Posted by CIRI Human Rights Data Project at 7:38 PM

Where to Find CIRI Data

You can now access the entire data set by using the links in the menu at the top of this page.

HUMAN RIGHTS IN 2011: THE CIRI REPORT

The CIRI Human Rights Data Project has released its ratings of government respect for 16 internationally-recognized human rights in almost every country in the world for the year 2011.  The CIRI Project’s data stretch back, annually, to 1981 and can be freely accessed at www.humanrightsdata.org.
The CIRI data are used by governments, scholars, international organizations, businesses, think tanks, and students the world over for a variety of purposes.  The project is co-directed by Dr. David L. Cingranelli (Binghamton University), Dr. David L. Richards (University of Connecticut), and Dr. K. Chad Clay (University of Georgia).

This data release has also been accompanied by a number of changes at the CIRI Project.  A new country was added to the data for 2011 (South Sudan), and, reflecting the addition of a new co-director (K. Chad Clay) in Fall 2012, the project’s citation has changed.  Perhaps most importantly, CIRI’s release schedule has changed.  In the future, data updates will be issued annually in January to cover the year that began two years previous.  As such, the 2012 ratings will be released in January 2014.

Below, we present four stories from the 2011 data:

THE “ARAB SPRING” & HUMAN RIGHTS IN THE NEAR EAST & NORTH AFRICA

Beginning in Tunisia in December 2010, the wave of demonstrations, protests, and conflicts known as the “Arab Spring” swept through the Arab world in 2011.  What effect did this have on respect for human rights in the Near East and North Africa (as defined by the US State Department)?  Table 1 displays the change in the overall human rights score, as well as in the CIRI Physical Integrity Rights Index, from 2010 to 2011. 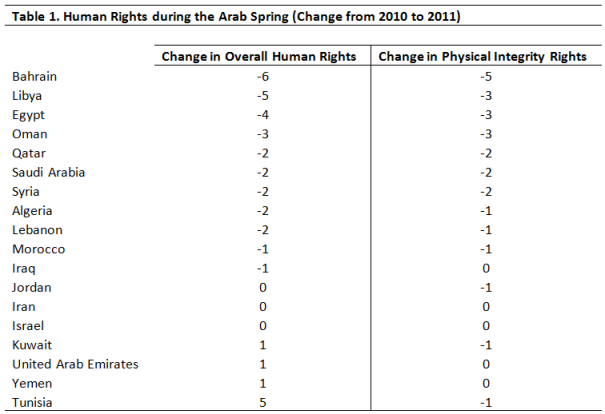 As can be seen, most states in the region demonstrated reduced respect for human rights in 2011, particularly those states that experienced some of the highest levels of unrest that year, e.g. Bahrain, Libya, and Egypt.  Of course, other states, like Syria, Yemen, Saudi Arabia, and Iran, already had extremely low scores on our indicators and thus, had little room to move down.  On the other hand, Tunisia experienced a large increase in its overall human rights score, owing to the overthrow of its government early in the year and the elections held in October.  However, this was not enough to overcome the high level of physical integrity rights abuse that accompanied the protests early in the year, which led to a decrease in respect for physical integrity rights from an already low score of 3 in 2010 to 2 in 2011.
STABILITY & CHANGE IN WOMEN’S RIGHTS
CIRI also annually codes two measures of internationally-recognized women’s rights: women’s political rights and women’s economic rights.  The women’s political rights measure is aimed at capturing the degree to which government laws and practices ensure that women enjoy the rights to vote, to run for political office, to hold elected and appointed government positions, to join political parties, and to petition government officials.  The women’s economic rights measure captures the degree to which government laws and practices ensure that women enjoy equal pay for equal work, free choice of profession or employment, the right to gainful employment, equality in hiring and promotion, job security, freedom from discrimination by employers, freedom from sexual harassment, and the right to work in dangerous professions, including working at night and working in the military and police forces.
Our two measures of women’s rights moved in opposite directions in 2011.  While women’s political rights improved for the second straight year, women’s economic rights suffered a setback after two consecutive years of improvement.  Indeed, this is in keeping with these measures’ performance over time.  As shown in the graph below, respect for women’s economic rights has lagged behind respect for women’s political rights consistently since 1981.  However, that gap has widened with time, as respect for women’s political rights has consistently grown while respect for women’s economic rights has remained relatively flat. 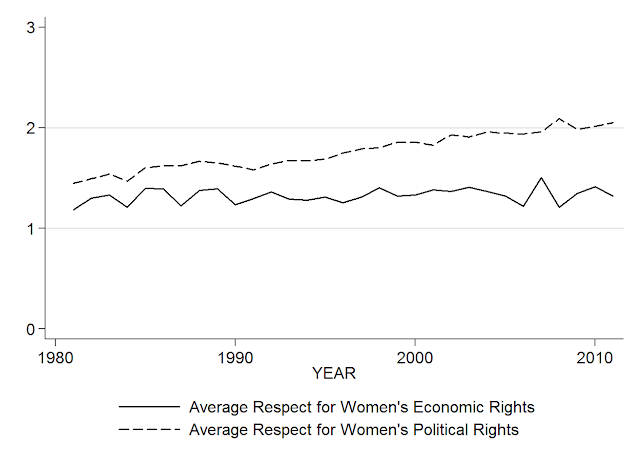 Note: The shapefile used to construct the above map comes from Weidmann, Kuse, and Gleditsch’s cshapes, version 0.4-2.  The map was made using Pisati’s spmap package in Stata 12.1.  Another version of this post can be viewed at the The Quantitative Peace.
Posted by Unknown at 12:59 PM

Our webmaster has resolved the aforementioned issue with the Kosovo 1981 country-year, so there should be no more need to manually remove those 0s from the dataset. Thanks for bearing with us on this! Sincerely, The CIRI Team
Posted by Unknown at 9:32 AM

We are experiencing a technical glitch where the server is replacing blanks (no data) with 0s for the row of Kosovo, 1981. We're working on remedying this, but pleased be advised for the moment to remove those 0s from the dataset before analysis. Sincerely, The CIRI Team
Posted by Unknown at 10:31 AM

Email ThisBlogThis!Share to TwitterShare to FacebookShare to Pinterest
Older Posts Home
Subscribe to: Posts (Atom)
The CIRI Human Rights Dataset contains standards-based quantitative information on government respect for 15 internationally recognized human rights for 202 countries, annually from 1981-2011. It is designed for use by scholars and students who seek to test theories about the causes and consequences of human rights violations, as well as policy makers and analysts who seek to estimate the human rights effects of a wide variety of institutional changes and public policies including democratization, economic aid, military aid, structural adjustment, and humanitarian intervention.