HUMAN RIGHTS IN 2010: THE CIRI REPORT

In conjunction with Human Rights Day, 2011, the CIRI Human Rights Data Project releases its ratings of government respect for 16 internationally-recognized human rights in almost every country in the world for the year 2010. The CIRI project's data stretch back, annually, to 1981 and can be freely accessed at www.humanrightsdata.org

The CIRI data are used by governments, scholars, international organizations, businesses, think tanks, and students the world over for a wide variety of purposes. The project is Co-Directed by Dr. David L. Cingranelli (Binghamton University) and Dr. David L. Richards (University of Connecticut) and assisted by Senior CIRI Associate K. Chad Clay (University of Georgia). Any inquiries may be addressed to info@humanrightsdata.org

Below, we present four types of stories from this year's released data:

All 14 of CIRI's indicators of particular human rights can be summed into an overall human rights score for each country in the world. The top (best) score a country can receive is 30, while the worst score would be 0. The world average was 18 and the USA scored 26 (tied for 5th place). Below are the best and worst of 2010.

On May 20, 2011, the United Nations elected 15 new members of the UN Human Rights Council. Here are their total CIRI human rights scores for 2010, out of a possible 30 points. Six out of the fifteen new members had scores below the world average of 18 for the year 2010. Below are the scores for each new member:

The CIRI Index of Physical Integrity Rights measure's a government's overall level of respect for four rights: torture, extrajudicial killing, political imprisonment, disappearance. The index ranges from 0 (no respect for any of these four rights) to 8 (full respect for all four of these rights). In 2008-2009, the world saw an overall average increase in these rights of .047. However, a reversal of this improvement was seen from 2009-2010, with it's overall average decline in respect of -.031. In particular 2009-2010 saw the following dramatic changes:

The fact that the CIRI data stretch back in time to 1981 allows for longitudinal comparison. For example, the graph below shows how regional averages of respect for physical integrity rights have changed over the years: 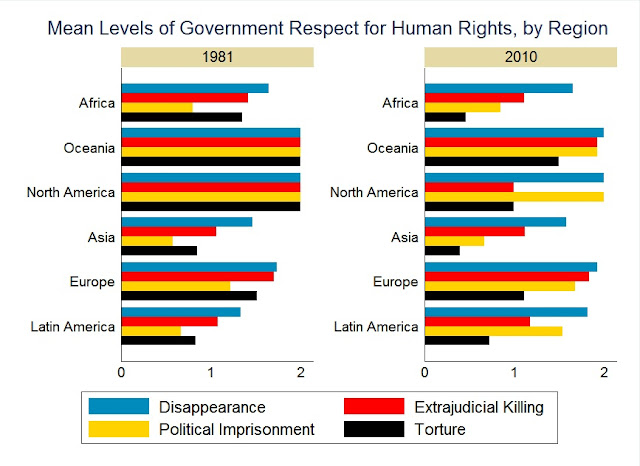 An important part of this overall decline in respect for physical integrity rights comes from a continuing degradation, globally, of respect for the right not to be tortured. For example, 2009-2010 saw 17 countries engage in more torture, while only 8 engaged in less torture. Below is the list of these countries. CIRI's indicator of government respect for torture is as follows: (0) Frequent/systematic torture, (1) Moderate/occasional torture (2) No reported/confirmed episodes of
torture.

This trend in the greater use of torture is not a post-9/11 phenomenon, however. The chart below shows the increased use of torture beginning in the early 1980s. The extent of the drop in respect for this right differed by region and is seen to be particularly acute in Africa.

Email ThisBlogThis!Share to TwitterShare to FacebookShare to Pinterest
Newer Post Older Post Home
The CIRI Human Rights Dataset contains standards-based quantitative information on government respect for 15 internationally recognized human rights for 202 countries, annually from 1981-2011. It is designed for use by scholars and students who seek to test theories about the causes and consequences of human rights violations, as well as policy makers and analysts who seek to estimate the human rights effects of a wide variety of institutional changes and public policies including democratization, economic aid, military aid, structural adjustment, and humanitarian intervention.